Driving under the influence of alcohol or drugs is a major contributor to fatal road crashes in Canada. Youth are the largest group of drivers who die in crashes and test positive for alcohol or drugs. Other areas of concern are the possible increases in cannabis impaired driving among adults and the potential for some prescription medications to impair driving ability. The research section summarizes current information about the effects of alcohol, cannabis and other drugs on driving, as well as risks associated with youth and impaired driving.

Driving Under the
Influence of Alcohol

Driving Under the Influence of Alcohol

Driving under the influence of alcohol can result in deadly consequences. Although these types of fatalities have declined in recent years, in 2014 (the year for which most recent data are available) more than one in four fatally injured drivers (28.4%) tested positive for alcohol. Alcohol-impaired driving remains an ongoing public safety concern and major contributing factor to road crashes in Canada.

Driving with a blood alcohol concentration over 80 milligrams of alcohol in 100 millilitres of blood (80 mg/dL or .08) is a criminal offence in Canada. In an effort to reduce impaired driving harms, most provinces have lowered acceptable blood alcohol levels to 50 mg/dL (.05).

Canada has zero tolerance alcohol and drug policies for young and novice drivers because they are a high-risk population for alcohol-impaired driving. For more information on impaired driving laws, please view Policy and Regulations.

In an effort to reduce the risks and harms of alcohol-impaired driving, the Government of Canada introduced mandatory alcohol screening in December 2018. This new law allows law enforcement to demand a breath sample from drivers without needing reasonable suspicion that the driver has consumed alcohol. 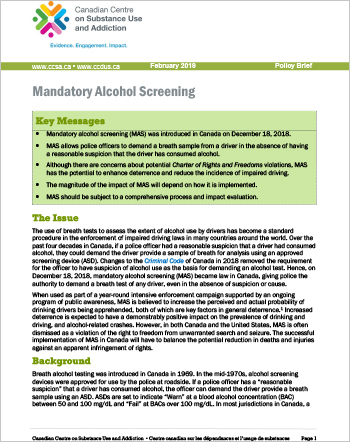 Driving Under the
Influence of Cannabis

Driving Under the Influence of Cannabis

Driving under the influence of cannabis increases the risk of vehicle collisions causing serious injury or death. With the recent legalization of cannabis, there has been increased focus on cannabis use among Canadians, how often people drive after using cannabis, and the costs to society resulting from crashes associated with using cannabis.

After alcohol, cannabis is the most commonly detected substance among drivers who die in traffic crashes. It impairs the cognitive and motor abilities necessary to safely operate a motor vehicle. For more information on the different ways in which cannabis affects driving, see Clearing the Smoke on Cannabis: Cannabis Use and Driving (an update).

Along with the significant impact on people’s lives, collisions associated with cannabis use are costly. In 2012, cannabis-attributable costs were estimated at $1.09 billion in Canada, with almost two-thirds of all fatality-related costs being associated with young adults aged 16 to 34. Further:

For more information about cannabis, resources and tools to address cannabis use, and its impact on health, see Cannabis.

Collisions Attributable to Cannabis: Estimating the Harms and Costs in the Canadian Provinces (Report at a Glance)

Share
on Twitter
on LinkedIn on Facebook via email
Learn More about Collisions Attributable to Cannabis: Estimating the Harms and Costs in the Canadian Provinces (Report at a Glance)

Driving Under the
Influence of Drugs

Driving Under the Influence of Drugs

Various types of drugs can impair driving and potentially result in serious injury or death. These drugs includes prescription medications (e.g., opioids, sedatives), over-the-counter medications (e.g., sleep aids, cold medications) and illegal drugs (e.g., cocaine, heroin). These drugs can also negatively affect cognitive and motor functions, including those essential to operating a vehicle. In addition, drugs used in combination with other drugs (e.g., alcohol and cannabis) can multiply impairing effects. For more information, please see the Effects of Drugs on the Body and Driving handout.

Canada lacks a standardized set of national indicators to adequately measure the full impact of drug-impaired driving (DID). Although important information — such as number of fatalities and arrest rates— is available, these data are very limited, while other types of important data (e.g., injury data) are not systematically collected. Collection of data is also often inconsistent and data are often under-reported.

To address the issue of limited data, CCSA consulted with 106 frontline practitioners, researchers, analysts and experts on DID across Canada. Our discussions included asking their ideas on how this information should be collected and finding out their recommendations on what data should be collected to effectively measure DID.

From the experts consulted, CCSA formed a DID Indicators Advisory Committee. Over the next two years, the committee will use the insights in this report and the expertise of committee members to develop a list of recommended indicators for DID. It is expected that the report on recommendations for indicators will be released sometime in 2021. 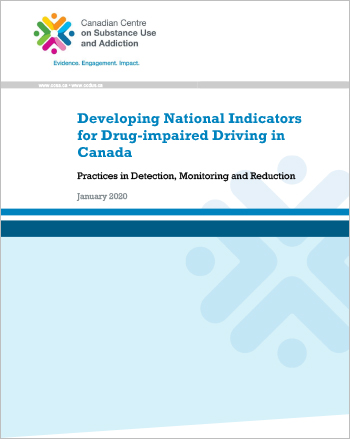 Share
on Twitter
on LinkedIn on Facebook via email
Learn More about Developing National Indicators for Drug-impaired Driving in Canada: Practices in Detection, Monitoring and Reduction

To address concerns with the legalization and regulation of cannabis and to reduce harms associated with drug-impaired driving, Canada and all Canadian jurisdictions have amended their drug-impaired driving laws. To help detect drug-impaired drivers, the Canadian government approved a new portable oral fluid screening device for use by law enforcement. More information on updated laws, various tools and their legal implications can be found in Policy and Regulations.

The potential for impairment by drugs can be assessed through driver behaviours, oral fluid screening devices and other means. For more information about detecting drug-impaired drivers, please see Policy and Regulations.

The potential for impairment by drugs can be assessed through driver behaviours, oral fluid screening devices and other means. For more information about detecting drug-impaired drivers, please see Cannabis-Impaired Driving.

Prescription medications with psychoactive properties are a risk to drivers. Many Canadians might not be aware of the potential impairing effects of different types of medications. Individuals taking medications must ask their doctor or pharmacist about potential risks to driving. 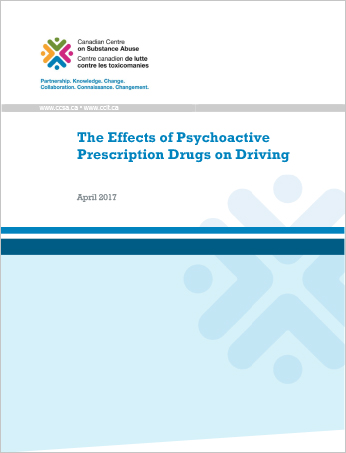 The Effects of Psychoactive Prescription Drugs on Driving (Report)

Youth and Driving Under
the Influence of Substances

Youth and Driving Under the Influence of Substances

As new and inexperienced drivers, young people are already at high risk for vehicle crashes. Consuming alcohol or drugs such as cannabis before or while driving greatly increases their risk of injury or death. Driving under the influence of alcohol or drugs among young and new drivers is considered so dangerous that all Canadian provinces and territories prohibit the presence of any alcohol or drugs in these drivers when operating motorized vehicles of any kind.

Youth knowledge on the risks and harms associated with alcohol-impaired driving has improved over the years. However, young people can have skewed perceptions about the prevalence, acceptability and risks of drug-impaired driving, particularly the use of cannabis, which increases their likelihood of engaging in this behaviour. For instance, in 2018, 26.7% of those aged 16 to 19 who reported using cannabis reported driving within two hours of using it, and 35.3% of those aged 20 to 24 also reported driving within two hours (Canadian Cannabis Survey).

The following misperceptions are common among youth:

To help combat misinformation and misconceptions, and to encourage youth to make responsible choices, CCSA has made an effort to identify effective prevention programs, interventions, initiatives and approaches aimed at reducing impaired driving among youth.

For more information on youth perceptions, see the full report. 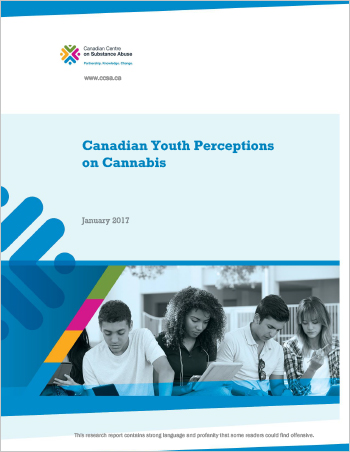 Youth and Driving Under
the Influence of Cannabis

Cannabis is the most commonly detected drug among Canadian youth fatally injured in motor vehicle crashes. Overall, between 2000 and 2010, drivers aged 16 to 24 years were more than twice as likely as those aged 35 years and older to test positive for cannabis, 25.8% versus 9.7% respectively. The high rates of cannabis use among young drivers seems to be related to the fact that they do not necessarily believe that cannabis impairs their ability to operate a motor vehicle safely. However, the evidence indicates that cannabis negatively affects their ability to drive and doubles the risk of being involved in a serious collision. Further: 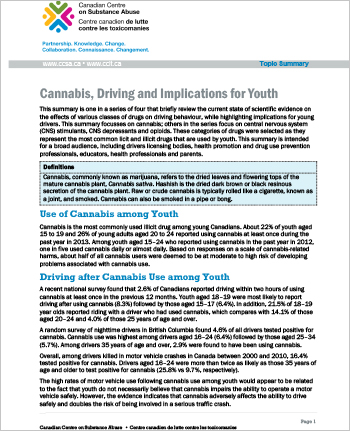 Youth and Driving Under the Influence of Opioids

In 2013, among youth aged 15–19, 13.6% reported past-year use of opioid pain relievers and 15.9% of those aged 20–24 reported past-year use. Overall, between 2000 and 2010, 2.2% of fatally injured young drivers (aged 16 to 24 years) tested positive for opioids. While opioids can cause sedation and drowsiness, which influence an individual’s ability to safely operate a vehicle, testing positive does not guarantee that the driver was impaired. 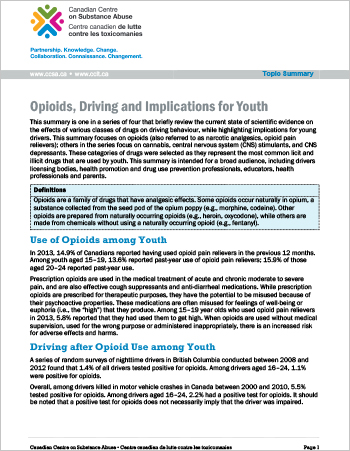 Youth and Driving Under the Influence of Sedatives

In 2013, 3.6% of Canadian youth aged 15–19 reported having used sedatives in the previous 12 months and among those aged 20–24, 4.7% reported past-year use. Overall, between 2000 and 2010, 4.1% of fatally injured young drivers (aged 16 to 24 years) tested positive for sedatives. While sedatives can cause drowsiness and impair motor coordination, which can significantly impact one’s ability to safely operate a motor vehicle, testing positive does not guarantee that the driver was impaired. 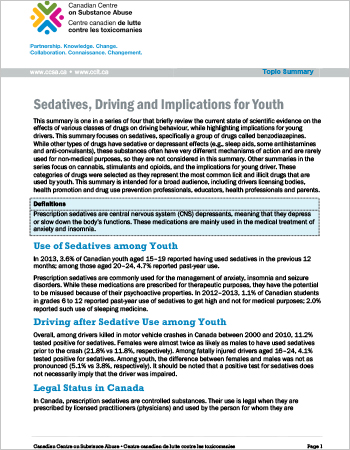 Youth and Driving Under the Influence of Stimulants

About 2.6% of Canadian youth aged 15–19 years report having ever used cocaine and 1.8% report having used amphetamine or methamphetamine, all of which are common stimulants. Among older youth, 8.3% of those aged 20–24 report cocaine use and 3.6% report use of amphetamine or methamphetamine. Overall, between 2000 and 2010, 8.8% of fatally injured young drivers (aged 16 to 24 years) tested positive for stimulants. While stimulants can impact one’s ability to focus as well as increase risk-taking, which can negatively impact one’s ability to safely operate a motor vehicle, testing positive does not guarantee that the driver was impaired. 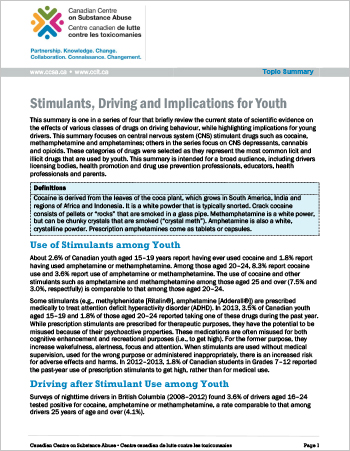 Youth Passengers of Individuals Driving Under the Influence

Although it does not receive as much attention as drinking and driving, riding with a driver who has been drinking or using cannabis is a relatively common behaviour among youth. For instance, 31.7% of youth aged 16 to 19 reported being a passenger in a vehicle with someone who had used cannabis within two hours of driving, and 49.1% of those aged 20 to 24 had done the same (Canadian Cannabis Survey).

Some studies have shown that young passengers often have similar or lower levels of alcohol in their systems as drivers. This finding is concerning since young passengers can increase the risk of a crash for the young drivers they are riding with by distracting the driver or encouraging further risk taking. Along with other risks, there are a number of characteristics associated with young passengers who ride with drivers who have been drinking or using drugs. 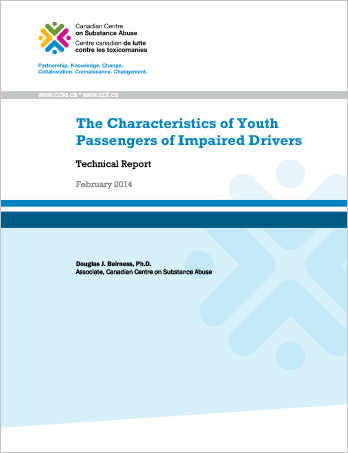 The Characteristics of Youth Passengers of Impaired Drivers: Technical Report

You can change your cookie settings in your web browser at any time. If you continue without changing your settings, we’ll assume that you are happy to receive cookies from our website. Review our Privacy Notice for more information.